How the Talmud can be a road map to peace

How the Talmud can be a road map to peace
Israelis and Palestinians could learn from the ancient rabbis
By Daniel Reisel, November 19, 2009
Could Bibi Netanyhau and Mahmoud Abbas (right), with Barack Obama at the UN in September, benefit from a Talmud class?
‘Two are holding a garment,” begins the Talmud in tractate Baba Metzia. Each claims they found it. “One says, kulo sheli — all of it belongs to me. The other says, kulo sheli — all of it belongs to me.”
The first chapter of Baba Metzia presents a well-known scenario. Two people claim an object. The nature of the dispute is such that the original ownership cannot be established. Both claims are emotional, exclusive and absolute.
Convene a court, says the Talmud, and let each party swear an oath. Following the swearing of the oath, the garment should be sold and the proceeds from the sale divided equally. But what is the content of the oath? One might have expected the court to require each side to swear that they own the whole garment. After all, that is what they have already stated. The Talmud rejects this as it would mean that at least one of them would utter a shvuah sheker, a false oath.
On the other hand, one might have expected each party, in the spirit of compromise, to swear that they own half the garment, the half currently in their possession. The Talmud rejects this solution too, on the grounds of mara lei lediburei , it would render their earlier statement a lie. Instead, the Talmud offers a striking formulation. Each party should swear they own lo pachot mi-chetziah, not less than half of it.
What is the difference between “half” and “not less than half”? In terms of the final outcome, the two formulations are virtually identical. In the end, both accept that the value of the garment will be divided equally between them. Emotionally, however, there is a world of difference. The Talmud’s solution allows each side to start the journey down from their absolute positions without denying their narrative. This enables them to keep their integrity and enter into dialogue without feeling defeated.
The formulation of “not less than half” is effective because it creates an imaginary space. It is imaginary because it is, in effect, the same “space” used twice. Both sides feel they have been granted more than their actual share. And they have: their story has been heard. The beauty of the Talmud’s move is that it realises that the dispute is not merely about the garment; it is about everything the disputed object represents. It is about everything that has been invested in the idea of the whole, and thus the pain of losing it.
The resolution of conflict doesn’t mean the end of the dialogue. The two sides will always inhabit the imaginary room together. Their dream of the whole will never leave them and this is something they will always have in common.
As suggested by Jeremy Haber in the Magnes Zionist blog, the Talmud’s approach could provide a precedent for solving the Arab-Israeli conflict. Two nations claim a land. One says, all of it belongs to me. The other says, all of it belongs to me. Each has their story. Each holds on to their side, unwilling to let go.
The Talmud teaches that the first task of an external arbiter is to engage the parties in unconditional dialogue. Open, respectful conversation is more likely to produce results than delegitimisation and denial. Humility cannot be enforced through humiliation. On the contrary, for it to work, such a process must accept the historical and religious ties of each side to the land. Neither side should be expected to give up their emotional connection to the whole. Neither side should be required to utter falsehoods.
At the same time, for the dialogue to be effective, each party has to start the journey down from their absolute positions. Each side needs to accept that although they have a just claim to the whole, reality demands a fair solution. Rather than requiring each party to renounce their narrative, the Talmud counsels each side to state unequivocally: “I don’t own less than half of this land.” Only then can the painstaking process of division commence.
We need leaders, both political and religious, who have the courage to lead us on this complex journey. If it proves too costly for them, as it did for Yitzhak Rabin, then other actors on the ground need to create the conditions for dialogue.
In this process, we need to take more pride in our heritage, not less. We should never be required to give up the dream of the whole. Yet we must realise that to want the dream exclusively for ourselves will transform it into our worst nightmare. We need to hold fast to our side of the garment. But we need to realise that ours is the many times promised land. There are others who hold fast to it as well. And it is time we made space for their narrative, too.
In 1956, eight years after the miracle of Israel’s founding, David Ben Gurion said: “In Israel, anyone who doesn’t believe in miracles is not a realist.” In the arduous task of securing Israel’s future, we need to preserve our faith in our ability to work miracles. For this, the Talmud offers us a timeless template.
Daniel Reisel is education chair of the Jewish human rights organisation René Cassin
Posted by יהודה Yehuda-Alain at 6:15 AM No comments:

The Palestinian version of Brit Shalom 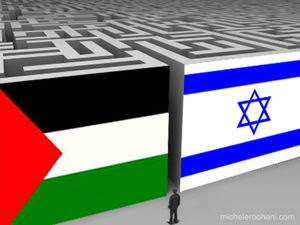 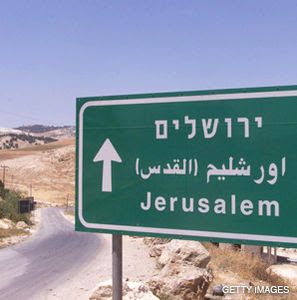 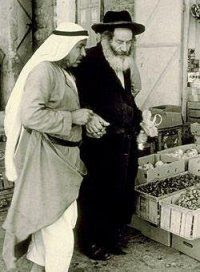 Email ThisBlogThis!Share to TwitterShare to FacebookShare to Pinterest
Labels: Français