The Six-Day war and the Palestinians 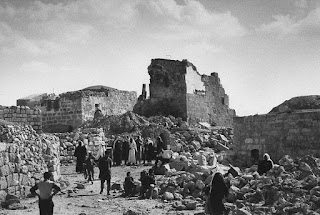 Let's remember, 50 years later
An attack by the PLO could have been a trigger of the Six-Day War. This same war lead to the Israeli occupation of the West-Bank and Gaza, the disproportionate reaction of the Israelis being a part of this trigger....

In early November 1966, Syria signed a mutual defense agreement with Egypt.[23]Soon thereafter, in response to Palestine Liberation Organisation (PLO) guerilla activity,[24][25] including a mine attack that left three dead,[26] the Israeli Defence Force (IDF) attacked the village of as-Samu in the Jordanian-occupied West Bank.[27] Jordanian units that engaged the Israelis were quickly beaten back.[28] King Hussein of Jordan criticized Egyptian President Gamal Abdel Nasser for failing to come to Jordan's aid, and "hiding behind UNEF skirts"

The Samu incident or Battle of Samu was a large cross-border assault on 13 November 1966 by Israeli military on the Jordanian-controlled West Bank village of Samu in response to an al-Fatah land mine attack two days earlier near the West Bank border, which killed 3 Israeli soldiers on a border patrol. It purportedly originated from Jordanian territory. It was the largest Israeli military operation since the 1956 Suez Crisis and is considered to have been a contributing factor to the outbreak of the Six-Day War in 1967

Demolition of 40 to 120 houses in the town of Samu; rioting in West Bank against king of Jordan; increased tensions contributing to outbreak of Six-Day War
In Jordan, King Hussein was faced with a storm of criticism for failing to protect Samu, emanating from Jordanians, as well as from Palestinians and neighboring Arab countries. Riots spread throughout the West Bank demanding the king be overthrown. Four Palestinians were killed by Jordanian police as a result of the riots. On 20 November, Hussein ordered nationwide military service.

The West-Bank participated in the war
"Nine brigades (45,000 troops, 270 tanks, 200 artillery pieces) were deployed in the West Bank, including the elite armoured 40th, and two in the Jordan Valley."

Gaza could have remained Egyptian if Palestinians didn't attack the Negev
"With the exceptions of Rafah and Khan Yunis, Israeli forces had initially avoided entering the Gaza Strip. Israeli Defense Minister Moshe Dayan had expressly forbidden entry into the area. After Palestinian positions in Gaza opened fire on the Negev settlements of Nirim and Kissufim, IDF Chief of Staff Yitzhak Rabin overrode Dayan's instructions and ordered the 11th Mechanized Brigade under Colonel Yehuda Reshef to enter the Strip. The force was immediately met with heavy artillery fire and fierce resistance from Palestinian forces and remnants of the Egyptian forces from Rafah.

By sunset, the Israelis had taken the strategically vital Ali Muntar ridge, overlooking Gaza City, but were beaten back from the city itself. Some 70 Israelis were killed, along with Israeli journalist Ben Oyserman and American journalist Paul Schutzer. Twelve members of UNEF were also killed. On the war's second day, June 6, the Israelis were bolstered by the 35th Paratroopers Brigade under Colonel Rafael Eitan, and took Gaza City along with the entire Strip. The fighting was fierce, and accounted for nearly half of all Israeli casualties on the southern front. However, Gaza rapidly fell to the Israelis."


Israel did everything in order not to have to occupy the West-Bank
"In May–June 1967 Eshkol's government did everything in its power to confine the confrontation to the Egyptian front. Eshkol and his colleagues took into account the possibility of some fighting on the Syrian front. But they wanted to avoid having a clash with Jordan and the inevitable complications of having to deal with the predominantly Palestinian population of the West Bank. The fighting on the eastern front was initiated by Jordan, not by Israel. King Hussein got carried along by a powerful current of Arab nationalism. On May 30 he flew to Cairo and signed a defense pact with Nasser. On June 5, Jordan started shelling the Israeli side in Jerusalem. This could have been interpreted either as a salvo to uphold Jordanian honour or as a declaration of war. Eshkol decided to give King Hussein the benefit of the doubt. Through General Odd Bull, the Norwegian commander of UNTSO, he sent the following message the morning of June 5: "We shall not initiate any action whatsoever against Jordan. However, should Jordan open hostilities, we shall react with all our might, and the king will have to bear the full responsibility of the consequences." King Hussein told General Bull that it was too late; the die was cast."

Posted by יהודה Yehuda-Alain at 12:57 PM